I have a memory from my early childhood of watching home movies at my grandparent’s house.  There was one movie of me getting a bath in the sink (I was probably about 6 months old).  I remember being completely horrified that my naked infant body was on film, for all to see.  My grandpa, seeing how upset I was, spliced that part of the film out of the reel, never to be seen again.  I was forever grateful for that, but also now know that there wasn’t anything for me to be so upset about.  I’ll guess that vast majority of people have some of those same pictures of themselves or their own children, just as I do of mine.

So, with my disclaimer in place, I give you, Rory. 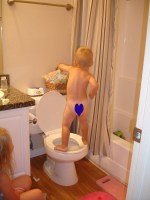 We are kind of potty training.  I’m a firm believer in not forcing the potty training and waiting until they are completely ready so Rory is probably about 50% potty trained.  My little guy is what we call vertically challenged and can’t reach the toilet when he is standing.  Yes, he used to sit on the toilet, but once he realized that boys stand up to pee, he had to do it.  I normally have a little step stool in the bathroom that he can stand on, but it got moved so this was Rory’s solution.  He not only stands on the toilet, but he strikes poses – as seen in the photos above.  It’s hilarious and taking these pictures of him are actually benefiting me.  Each time he sees them, he runs off to go pee.

So in few years when Rory hopefully learns humility, I can at least tell him that I censored the photos and that without the pictures, he may still be wearing diapers.