I like trying new foods.  There aren’t many things that I absolutely despise when it comes to food. In fact, there has actually only been one food that I found to be completely repulsive – and that was lutefisk.  My husband’s family is Swedish and it’s a holiday tradition to serve it.  I can’t say I was forced into eating it, but pressured?  Absolutely.  The smell is atrocious and it doesn’t look appetizing in the least.  I watched my husband’s uncle, Al, shovel it in like it was the best thing he ever tasted so I figured it couldn’t be that bad.  I had never been so wrong in my life.  It was horrendous.  I can’t remember if I actually swallowed the one bite I took, but that was the only morsel of lutefisk that passed my lips.  For two weeks following my taste, each time I thought of it, my mouth would salivate, but not in that good way it does when you smell bacon.  It was that pre-puke saliva.  The one you get after you realized you shouldn’t have had that last beer.  Or when you find the sippy cup of milk that rolled under the couch a week prior and is now a sippy cup full of solid milk (which somewhat resembles lutefisk in appearance).

OK, moving on.  So who’s hungry?  Over the weekend, I found some cute little prickly pears at the store.  I had never had one and they looked interesting so I decided to get a couple. 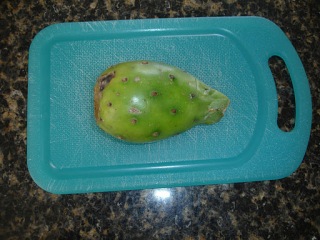 I sliced off the top and could see that the skin was really thick so I started cutting it off the sides.  Here is the inside: 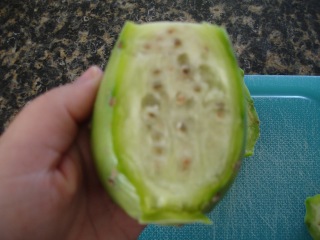 All of those little brown things are seeds.  I thought maybe they were like kiwi seeds and you could just eat them, so I peeled the rest of the fruit and cut off a piece.  I didn’t try a nibble – I threw the whole piece in my mouth, seeds and all.  As it turns out, you can’t eat the seeds.  Well, I guess you could, but they are hard.  Like little rocks.

So I ended up with this:

That chunk on the top is what I spit out after realizing I couldn’t eat it.  The taste wasn’t that bad, but I have no idea how to eat this with all those damn seeds!  It tastes pear-like, but those seeds remind me of eating a pomegranate.

I have one prickly pear left (I don’t think this is what they are actually called) so I guess I should do a little research online to figure out how this is to be eaten.  If you know, feel free to pass on your knowledge.