Kamryn is rarely scared of things.  Sometimes she claims to be afraid of something only because she thinks she should be, but in reality, she isn’t at all.  For example, if we are watching a movie and there is a monster, ghost, mummy, vampire, etc, she’ll grab on to me, shutter and say in a trembling voice “I’m scaaaaaared!”  Then, the minute I look at her she starts laughing.  She asked me to put a nightlight in her room recently, but only because I put one in Rory’s room.  I had to put something in front of it so it wasn’t so bright.  There is no doubt that if I took it out of her room she wouldn’t even notice.

She used to be my spider killer up until a few months ago.  Now, she won’t kill them, she insists that I catch them and set them free (unless they are daddy long legs – those I can kill).  As a child, I was terrified of spiders and truth be told, I am not much more comfortable around them as an adult.  I had to catch and release a spider that looked exactly like this: 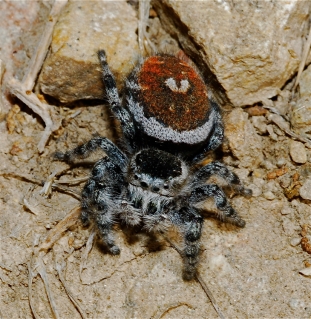 It was about the size of a quarter with it’s legs.  The odd thing about this situation wasn’t that I had to catch it and release it, it was only after Kamryn played with it that she wanted me to throw it outside.  She wasn’t touching it, she was watching it and tapping on the window that it was crawling on.  She didn’t call me to retrieve it until it crawled up on her stuffed animals and she couldn’t reach it.  Eeeeeewwwwww!

Today while we were eating lunch, Kamryn told me she had the worst nightmare in her whole life.  I like hearing about her dreams – they are usually about her playing with her friends or talking to princesses.  The only other nightmare that she has ever told me about was around 3 months ago.  In her dream, she got out of school and I wasn’t there to pick her up.  Obviously, a pretty scary situation for a 5 year old, but she did say that I showed up – I was just late.  And let it be noted that I have never been late to pick her up.

The nightmare she had last night totally trumps the previous dream.
I was in my room playing and my Barbie head starting talking to me.  It said I could only have one Barbie so I ran out to find you and you were doing your things so I went back in my room.  When I got back in there, it started saying I could only play with one Barbie again.  I didn’t like it!

I don’t know about you, but that sounds absolutely horrifying.  It’s a little Poltergeist-y and a little Woody in Toy Story telling Sid that he has to be nice to his toys.

As a precaution, I have put this…