February 5, 2006, exactly 6 years ago today, my life changed forever.  The day started off like any other…until I got out of bed.  I knew I was going to do something that Sunday morning that I had done before, but this time was feeling a bit different about it.  My hands were shaking, making my task a bit more difficult, but I knew the whole thing would be over in a few minutes.  Is that sufficient build up?  OK…today is the 6 year anniversary of day I found out I was pregnant with Kamryn.

We had been trying for about 6 months to get pregnant and although in hindsight, those 6 months seem like nothing, I remember each month felt like a year at the time.  I had friends who had been trying to get pregnant for years and I still can’t imagine what that felt like for them.  Ryan and I had gotten to the point of frustration and I had told him that if I wasn’t pregnant that month, I was going back to the doctor and lying about how long we had been trying.  Lucky for Ryan, there were 2 lines on the stick that morning.  I don’t know if he realized that the man typically gets tested first in those situations.

I had a million different thoughts running through my head.  I was excited about the thought of becoming a mother, scared about the pregnancy going OK, and a little nervous about the margarita I had on that Friday.  I told Ryan that we were going to have a baby and it was just like the scene from Seinfeld where Jerry cries.

Ryan doesn’t cry.  Ever.  His exact words were “I think I’m getting a little misty!”  Note he said I think.  I don’t know if he did or not – I had what I needed from him, it was all about me and my little embryo…or zygote?  Not sure at that stage.

Later that day we were watching the Superbowl at home because we weren’t ready to tell anyone that I was “with child” and my not drinking was a dead giveaway.  I was probably joining every online pregnancy group known to man and also wondering if I should take another pregnancy test.  (I ended up taking a test everyday for the next week just to be sure the first one or next 6 weren’t faulty.)  I started paying attention at the halftime show.  We had just seen The Stones play at Petco Park in November so that, along with my new pregnancy giddiness, had me up dancing around the livingroom.  Ryan turned to me and said “Are you sure you should be doing that?”  I’m sure he’ll say now that he was just kidding, but there was a hint of seriousness in that question.

I still have that pregnancy test.  It’s sitting in a Ziplock in a box somewhere.  I know Kamryn saw it a couple of years ago and asked me what it was.  I told her it was how I knew she was in my belly.  The look of confusion on her face was priceless.  It is kind of disgusting that I kept a stick covered in urine, but I definitely can’t throw it away now! 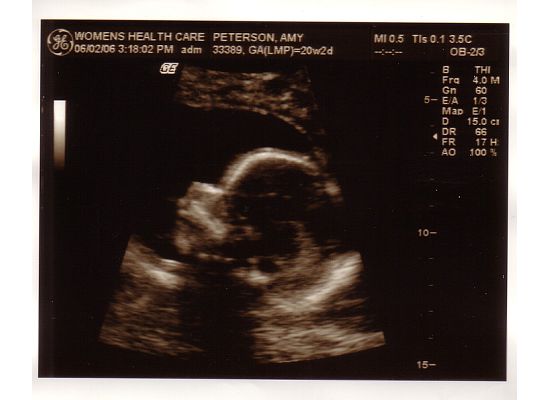 Profile of Kamryn in utero.