My day has been filled with some fairly intense pain.  I would like to say the pain is the result of me doing some extreme activities like running a marathon, rock climbing or bungee jumping, but those are just 3 things that I have no desire to do.

Before I tell you about the pain that I have and how it came to be, let me just say that this is the 2nd time this has happened and both times it has happened the exact same way.  The first time was a couple of months ago and while I was a little embarrassed about it, I thought it was just a fluke.  I have injured my neck for the second time in almost as many months by simply washing my hair.

Both times I was in the shower, rinsing the soap out of my hair and BAM!  I turned my head in such a way that my neck, upper back and now, my entire left arm is in pain.  The only relief I have is if I raise my left arm straight up in the air.  I have applied ice and taken ibuprofen and that has alleviated some pain, but as the day has worn on, the pain is getting a little worse.

Just for the record, I’m not tossing my head around in the shower like a Pantene commercial.  My hair is pretty long.  The longest it’s been in quite awhile, but I don’t know that I can contribute my tweaked neck to the length of my hair.  I just think my neck is getting old – or my head is getting heavier, which I guess could be contributed to longer, water-logged hair.  Either way, I’m thinking of investing in a waterproof neckbrace to wear in the shower. 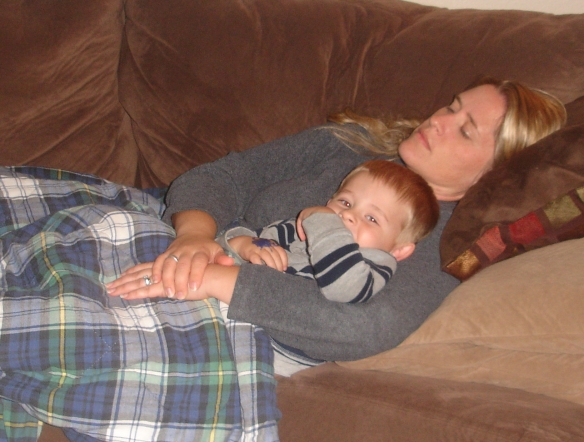 This is where you could find me almost the entire day - sometimes with Rory, sometimes not. Kamryn thought she should document my pain by taking pictures of me on the couch.

6 thoughts on “Getting Old Sucks”