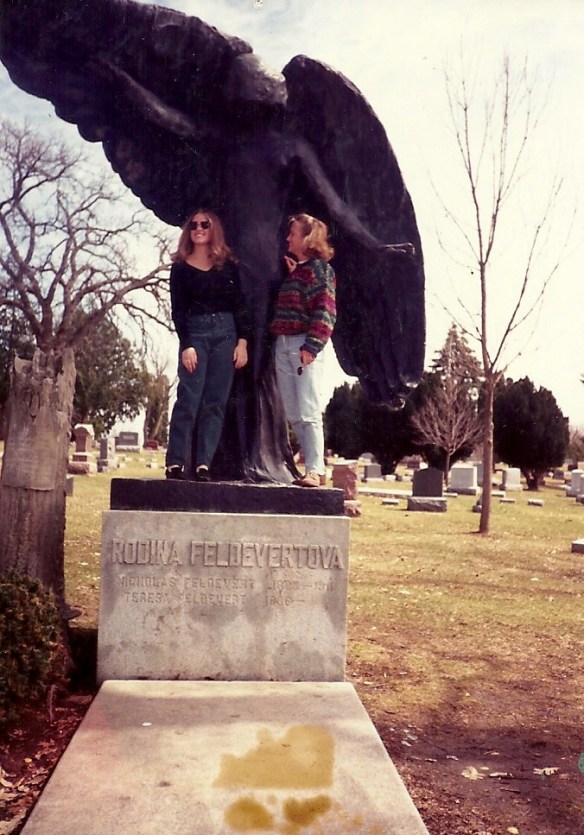 Me, The Black Angel, Sara

This picture is of me and my best friend, Sara standing on a grave.  It was taken in 1993 which would have made us either Juniors or Seniors in high school.  I’m going to say right now that I am pretty appalled that we found it appropriate to stand on someone’s grave and I am sure if I saw someone doing it today, I would shake my head in disapproval.

That being said, we were in high school and I would love to meet someone who didn’t do anything stupid or disrespectful during their high school years.  This was my one and only bad thing.

If you live in Iowa City, chances are you are more than familiar with this grave.  The Black Angel can be associated with multiple urban legends and is a popular spot to have the shit scared out of you.  The story I heard about The Black Angel was that a woman had purchased the grave marker for her husband when he was ill. The difference in the angel, however, was that it was white when she originally placed it in the cemetery (surprising since the statue is made of bronze).  She supposedly promised her husband that she would remain true to him even in death, but when he died, she fell in love with someone else and that is what turned the statue black.

Other legends claim to result in imminent death if you kiss, touch or walk around the angel at particular times or in certain conditions, ie pregnant or still carrying around your “V” card.  Basically, you’re cursed if you are anywhere near the statue.  The myths always seemed to target women instead of men, though so apparently sexism is alive and well in the world of legend!

I have touched and kissed this statue.  I didn’t die.  Sara is alive and well too.  If you want to read more about The Black Angel, you can find a lot of articles online. Here are a couple that I found to be particularly interesting.

Behind The Legends: Black Angel

City of Iowa City Article about The Black Angel

I remember the first time I went to Oakland Cemetery to find The Black Angel.  I had no idea where it was, but you can see it almost immediately once you enter the gates and look to the left.  It’s a matter of getting to it on all the curving asphalt paths that makes it creepy.  The Angel is always looming ahead and you can’t help but watch her as you make your way.  If you find yourself in the area go check it out, but please be respectful – you never know if those myths and legends are true and The Angel just took mercy on us because Sara was usually pretty good and I did good stuff every once and awhile.