This afternoon I had an appointment to get my hair done – a highlight and a cut.  It takes at least 2 1/2 hours from start to finish.  I had to take the kids with me for at least part of the time until Ryan got home from work.  Rory was scheduled to get his hair cut during that time and I was hoping that they could squeeze Kamryn in too.

Claude, my hair lady, had put in about 1/2 of the highlight foils when it was time for Rory to get his cut.  He climbed right up in the chair and I told the girl what I wanted her to do and went back to my station to get the rest of my highlights done.  I could see Rory in the mirror and he was sitting in his chair talking to the stylist – laughing and talking about really important stuff.  He has never been naughty when getting his hair cut.  I think he just likes watching himself in the mirror so much that it’s enough to keep him still for 10 minutes.

Rory's 1st haircut with Jill at Jae Elle's Salon in Iowa City. He was only 13 months. We miss you, Jill!!

Kamryn sat in a chair and played Angry Birds on my phone during Rory’s haircut and once he was done, she was able to get her ends snipped off.

Kamryn's 1st haircut - same day as Rory's 1st. She loves any kind of pampering so I was never worried about her sitting in the chair.

By the time Kamryn got done, we had been in the salon for an hour.  I knew my time was almost up before I would have two naughty and whiny kids on my hands.  I held out on the candy until absolutely necessary and by that time, Ryan was still about 20 minutes away.

Kamryn is 5 1/2 years old.  I expect her to keep her shit together when we are out in public.  Rory is a loose cannon, though.  He can go from sweet to demon seed in a blink of an eye.  It takes some work, but as long as I stay one step ahead of his naughtiness, I can usually head off any unsavory behavior.  He gets a little glimmer in his eye when he is about to do something bad.  I’m not kidding.  He squints his eyes just a little bit and kind of bears his teeth. 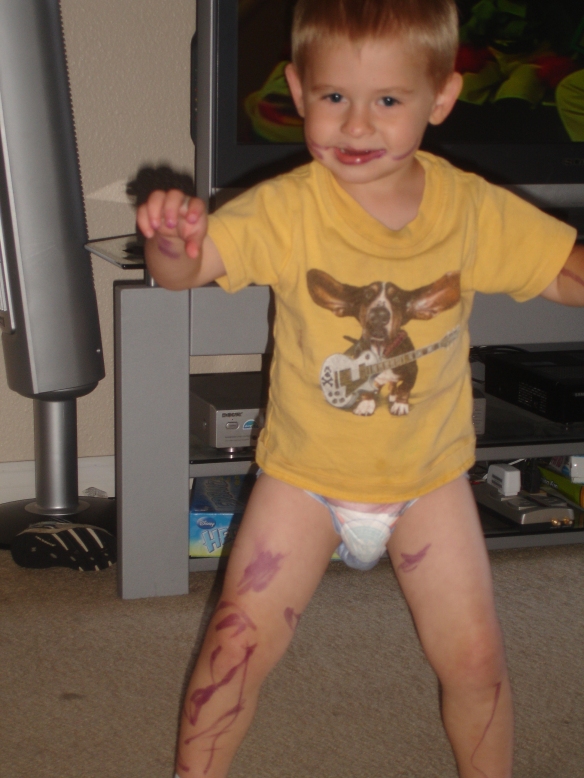 Ryan got to the salon to pick up the kids in the middle of my shampoo.  It was actually perfect timing – right before my scalp massage.  Claude had to grab some product for another client when an older woman – maybe in her late 60’s or early 70’s, came over to me and said the following:

Yes, I got TWO “You should be so proud”‘s.  Of course, I graciously thanked the woman because it is always nice to hear that someone thinks your kids are the bee’s knees.  We actually get a lot of compliments in regards to our children’s behavior when we are in public.  Most of the time, I simply thank the praise giver and move on.  Other times, I have had a shocked look on my face and it’s usually because I have just threatened to kill Santa Claus to preempt some act that one or both of them was going to attempt, ie sword fighting with butter knives.

It sounds like I’m bragging, but let me be clear, this isn’t as great as it sounds. MY KIDS ARE NOT GOOD ALL THE TIME!  In fact, when we are home, they can be really naughty!  I have had this discussion with so many other parents and I know I’m not alone.  The kids behave in public, but get them home and all of that pent up badness comes out in spades.  If I had to choose, yes, I would rather they behave in public because it makes me look good, but damn, can I have some of that carry over to home too?

I know my kids aren’t as bad as some and I’m sure there are some people who know my children really well and are around them frequently that think it would be best for me to shut my pie hole.  I can understand that, but I also know there are kids that are better behaved than mine.  I have see them and until my kids are as good those kids, there is always room for improvement.

2 thoughts on “Yes, Yes, They Are Very Good”