We decided to spend our Easter at the beach today.  It was a beautiful day and Kamryn wanted to try out her boogie board that she got for Christmas. 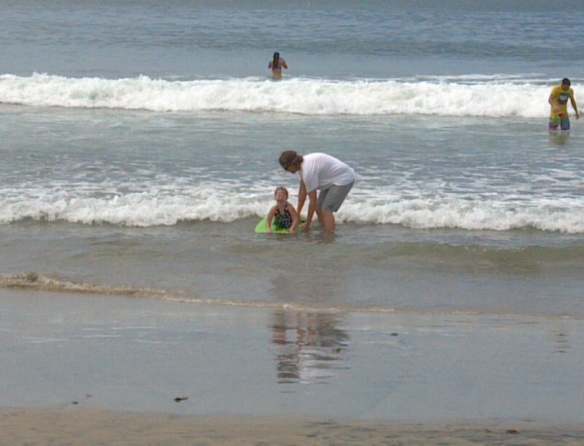 We got to the beach around 11:00 and stayed until 2:30.  The kids were so good the entire time we were there and I was happy because I got to lay in the sun and read my book.

See the ring around the sun? It was actually a rainbow all around the sun, but it doesn't show up well in my cell phone photo. I'm sure there is a name for this, but I don't know what it is, but it looked pretty cool.

I had been reading and not really paying attention to anything but my book.  The kids were in my peripheral vision, plus Ryan was tending to their needs so I was in my own little world for about 30 minutes.  I glanced up at one point and noticed that a family was making a huge, almost life sized dolphin as well as some turtles out of sand.  I had seen the very start of their work and I thought they were just making a moat so it was pretty cool to see what they had done in about an hour’s time.  I should’ve taken pictures of that, but I didn’t want to intrude on their work.

Once I noticed the sculptures that were being intricately carved out of the sand, it was hard not to watch them wet, pack and then mold the sand into the shape they wanted.  Everyone had a job – you could tell this wasn’t their first rodeo.

Not long after I started watching them, I watched Alex come barreling through the little sand sea that had been constructed with his boogie board tethered to his wrist.  Behind me were Alex’s parents.  How do I know they were Alex’s parents?  Because when Alex ran through the group of turtles, they yelled out at him to stop.

At first I thought it was an innocent mistake.  Alex was probably about 8 or 9 and was only running up to his parents and didn’t notice what was underfoot.  But then I noticed that Alex didn’t actually step on any of the turtles, he jumped over them and pulled his board over their sandy shells.  OK, I thought – no real harm done.  He stopped the minute he made it through the sculptures and turned around.  He pulled his boogie board behind him and took off running through the turtles again!  Alex’s parents again started yelling at him to stop destroying the turtles, but by this time he was already working his way back for his third run, this time ensuring the edge of his board severed one of the turtle’s heads.

I couldn’t believe what I was seeing and hearing for that matter.  I turned around at that point and glared at Alex’s parents.  The only thought running through my head was get off your fat ass and get control of that little asshole you call Alex!  I was just about to say something when one of the kids of the family making these sculptures yelled at him to stop.  She too was probably only 8 or 9, but she knew right from wrong and what Alex was doing to her work was clearly wrong.

Alex did stop destroying the sculptures at that point, but stood right next to the area and looked like he was going to take off again at any second.  I didn’t understood why the little girl’s father didn’t say something.  Maybe he didn’t care because the tide was going to wash away their work anyway.  Or possibly he was a religious man and thought killing a child on Easter Sunday would be a bad omen. Whatever his reason, he had much more restraint than I could ever dream of having.

The next time I encounter an “Alex”, I’ll try to show the same patience as the father demonstrated today, but I’m not going to make any promises.

5 thoughts on “Your Kid Is An Asshole”