Today while waiting for Kamryn to get out of school, I was discussing technology with a friend and the importance of keeping our kids technologically savvy.  Neither of us were rushing out to buy our 5 year old daughters smart phones or The New iPad, but we agreed they should at least be exposed to that sort of applied science because we’re not going to suddenly decide that the Commodore 64 was really all we needed.

I started thinking about how reluctant I am to get new electronics.  I don’t have a problem with change in most cases, but my cheapness can prove to be quite limiting when it comes to spending hundreds of dollars on something only to have it become practically obsolete within a year.  I am definitely more concerned with saving money than I am with having outdated computers.

I took one computer class in college and the only thing I remembered from it was that the US Government does not own the domain name, thewhitehouse.com.  Many people type in .com instead of .gov expecting to learn more about our President’s home and get directed to this. 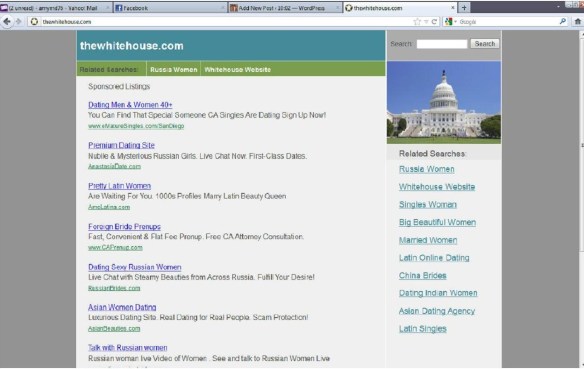 It’s interesting that a page for dates with Russian women come up. That seems like a logical next search after learning about the White House.

The commonality in all of my dissections was that I truly did not believe that any of them would work.  Then, if by some miracle, it did work, it was a very happy surprise for me.  I have had some great successes, like installing a new hard drive in my laptop along with all of the drivers to get it running.  I’m still using the same laptop 3 years later.  Others were huge fails that left me frustrated and with a lot of wasted hours.

A couple of months ago I started having trouble with my phone.  My 3G connection was gone and no matter what I did, I couldn’t get it back.  Everything else worked fine on my phone so I assumed there was an issue with Verizon’s service.  I stopped in one of the Verizon stores and asked if there was an issue with their 3G service and after an hour in the store with the Verizon guy trying to get it working, he told me he would have a new phone sent to me.  Nice.

Yesterday, I noticed the same damn thing happening with my phone.  Fearing user error, I decided to do some research online to see if there were any solutions.  I found quite a few forums with people having the same problem as me and nearly 1 billion different solutions that each person claimed to have “worked for me!”  I started randomly trying some of the suggestions and after about 8 unistalls, restarts and upgrades, I have my 3G back!

Yeah, you can just call me Nick Burns. 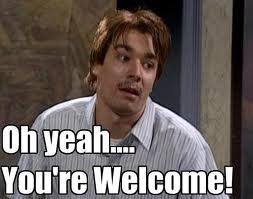 5 thoughts on “Honorable IT Degree”