This afternoon we were watching a show about the best pizza places in the country so I had to go off our weekly menu and make some pizza tonight instead.

The convincing pie that had me back at the store picking up a few things was the Mac ‘n Cheese pizza.  I have been wanting to make this for awhile, but always thought I had to make the mac ‘n cheese first and that was a little too much prep.  I wasn’t going to throw some Kraft crap on my pizza, it was going to have to be made from scratch.

Mac ‘n cheese pizza isn’t unique to one pizzeria.  I have had it at a couple of different places and it’s pretty standard – cheese and pasta and usually some kind of white sauce.  I thought maybe an alfredo sauce would be good, but then that can be kind of heavy and rich so I put my mac ‘n cheese pizza on the back burner until I saw the show today.

I don’t remember the name of the pizzeria that they were featuring, but the guy making it said it was the easiest pizza they made.  He started with a crust (duh), sprinkled a little mozzarella on top of that, squirted some crème fraîche on top, then added plain noodles and put it in the oven.  When it came out after about 8 minutes, that was when he topped it with cheddar cheese.

You can also make your own crème fraîche, but it involves intentionally letting some cream and buttermilk spoil on your countertop for about 12 hours.  I don’t think I could bring myself to eat it after knowing how long it sat out.  I prefer to let someone do the spoiling for me.

Here is the finished product:

My only complaint was that I didn’t cook it long enough.  It was good, but it could gone about another 5 minutes in the oven.

I also had to make a mashed potato pizza.  That one turned out perfect! 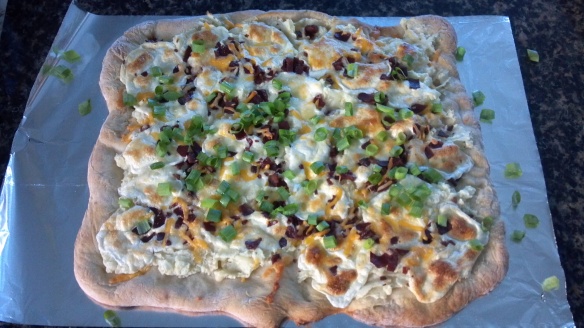