Don’t take the title too seriously.  I’m not going to jump up on a soapbox and judge other mothers about anything.  I just had a small epiphany today.

Without Rory, my role as a mother would have been pretty easy and rather boring.  Kamryn was and continues to be a fairly easy child.  She cried as a baby, but really only at the appropriate times.  She’s kind of whiny and a little sassy now, but other than that, she’s pretty good.  Remember, her teacher last year referred to her as a dream child.  I wouldn’t go that far, but I kind of like her.

Today, Rory came out in the living room pointing to his nose with a big smile on his face.  This isn’t strange.  If he sneezes, he’ll seek me out only to show me he has snot hanging out of his nose before he finds a Kleenex to remedy the issue.  I pointed to the box of Kleenex, but he remained still with the smile.

I got up and took a good look at his nose and I didn’t see any snot, but when he looked up, I did see something in his right nostril.

Rory had shoved a popcorn kernel up his nose.  This is a first.  I have never had to fish anything out of a child’s nose, ear, or any other orifice.  Thank God.  I remember my little cousin shoved a Tiny Tart up his nose when he was around 3 or 4 and I wondered what would prompt someone to do something like that.

I have to admit, I panicked a little.  I tried to think if I should try and grab it with a tweezers or see if I could hook it with my fingernail.  I gave it a go with my fingernail first and missed.  I had him lying on the ottoman and I was holding the bridge of his nose to ensure I didn’t shove it further up into his nasal cavity.  I gave it one more try and was able to scoop it out.  I grabbed the flashlight and was trying to peer deep into Rory’s nostril to see if I could see any other kernels up there.

I asked him three different times if he shoved any more up his nose and he wouldn’t answer me.  It was hard to see up there so I had him blow as hard as he could into a Kleenex and then looked again.  I couldn’t see anything up there so I think we’re in the clear.

I told Rory he isn’t to shove anything up there ever again.  He told me he wouldn’t.

About 20 minutes later, I told the kids to get dressed for gymnastics.  Rory came out completely dressed, but with his hair all over the place.  He said he put hairspray in his hair and upon closer inspection, he sprayed nearly an entire sample sized bottle in his hair.  it was crusting on his forehead as well as matting his thin blond hair to his scalp.

With only about 5 minutes before we had to walk out the door for gymnastics, I had to try and wash Rory’s hair which resulted in this. 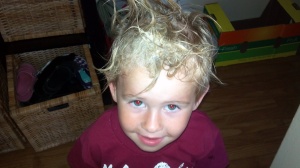 That’s shampoo – not hairspray, but it didn’t look much better.

There is never a dull moment with Rory around.  He is a constant source of entertainment and in near constant need of mothering.  I think one of the worst “kid” things Kamryn did was color all over the wall when I was on a conference call.  But, she did it with washable crayons.  Thanks for making sure I earn my mom badge, Rory.