I’m sure most have heard the awful news that Hostess is going out of business.  I haven’t had a Hostess product in awhile, but I have chalked up quite a few indulgences in my 36 years.

How you eat a Hostess Cupcake is more of a personal preference than the underwear you choose to wear under your chinos.  I preferred to peel off the frosting and set it aside.  I would then break the cake in half and lick out the cream filling.  I would eat the cake next and finally the frosting wafer.

I loved the two pack of cupcakes.  Whenever I bought it, I would eat one cupcake with the intention of saving the second for the next day.  Inevitably, I would eat that second cupcake within the hour.  Screw Sprinkles – I like Hostess Cupcakes. 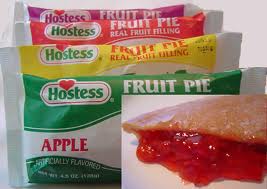 Besides the cupcakes, a very close runner up in my Hostess indulgences were the Fruit Pies.  I remember eating these all the time as a kid.  They were so much better than real pie because of that layer of sugary glaze on the outside.  I didn’t like pie crust as a kid because it wasn’t sweet enough.  This solved that problem and made a piece of pie a convenient, handheld delight.

I liked the blueberry one the best, but those were sometimes hard to find.  I made Ryan go out and find me one when I was pregnant with one of the kids and I believe I had to settle for apple.  I had such a huge craving that I probably could have eaten 6 in one sitting.  I loved everything about these pies – the taste, the weight (they were heavy!) and even the wrapper.  Luckily, I didn’t eat 6 because I may have gone into a diabetic coma or had a heart attack.  The “real fruit” pies are absolutely horrible for you.

Another one of my favorites was the Ho Ho.

It was basically just a cupcake flattened and rolled up, but the frosting was that waxy stuff that left a greasy feeling in your mouth.  I always tried to completely unroll the Ho Ho before I ate it, but that was a next to impossible feat.

Hostess held the market on so many scrumptious little pastries like SnoBalls, Ding Dongs, Donettes, Suzy Q’s, Chocodiles and Sweet Rolls.  Each one had their own little qualities and characteristics that was unique to that one product.  The store brand knock offs didn’t really compare to the Hostess brands.  They would do in a pinch, but they just didn’t quite satisfy that Hostess craving.

One Hostess product that I never really liked was the Twinkie.

I didn’t like the texture of the cake.  It was way too spongy for my liking.  I never felt like I fully got it chewed up in my mouth.  Also, the urban legend that a Twinkie had a nearly infinite shelf life never much appealed to me.

I know I’m not the only one that feels like a little part of their childhood is dying with that blue and red cellophane wrapper.  These products really are snack classics.

I have had a busy couple of days and I only have about 15 minutes to get a post in before I’m leaving for a much needed night out on the town.  I find the best way to commit to my daily posting, but still post something that isn’t complete b.s. (although, let’s be honest, it’s about 90% b.s. on my blog) is to review or recommend a recipe.

Yesterday, I made Guinness cupcakes with Bailey’s frosting.  I’m calling them drunkcakes.  The alcohol will cook out of the cupcake, but not the frosting.  You can’t actually get drunk from these, but you can taste the Bailey’s in the frosting.  It could be because I maxed out on the recommended amount in the recipe.  The recipe called for 4-8 Tablespoons of Bailey’s so I went the full 8…or maybe 9.  I kind of lost count.

Here is the recipe for Guinness and Bailey Irish Cupcakes.  Don’t bother making the filling.  I didn’t and they were awesome.  I think the filling would be too much.  I should have taken a picture of the cupcakes, but alas I did not.