Today was an interesting day.  I have never felt so bi-polar in all my life and I only have my children to thank.

This morning I woke up and felt an empty pit in my stomach (I think it’s a gall bladder issue).  It was just before 6:00 and I was secretly hoping Rory would wake up so we could hang out a little and I could gauge his feelings about starting preschool today.

Shortly after 6:00, Rory got up, came into my room (I had yet to actually leave my bed) with his outfit for his first day of school in his hands.  He said, “I’m ready to put my clothes on!”  So much for feeling the need to discuss this whole school thing.

After a breakfast of banana oatmeal, which he only took 3 bites of, I told him to brush his teeth.  He told me he wanted me to do it, but I was making Kamryn’s lunch and told him he was a big boy and he needed to do it.  We had a little back and forth argument about brushing teeth.  *Glancing at the clock*  When does he have to be at school????

By this time, Kamryn had awoken from her slumber and was demanding breakfast and then proceeded to argue with Rory about how many days he was going to be in school.  For the love of all that is holy!  Everyone shut the hell up for a minute and leave each other alone!

We were all ready, walking out the door, and Rory grabbed my hand.  He has done this every single day for as long as we have lived here, but today…oh today it was something different.  Tears were welling up in my eyes as me and my little buddy started down the stairs.

Once we got in the car, Rory was asking when I was going to drop him off.  We have discussed the procedure at great length for the last few days, but Rory continues to insist that he be dropped off first.  To which Kamryn screams in his face, “I HAVE TO GO TO SCHOOL FIRST OR I’LL BE LATE!”  Aaaaaaagggggghhhhh!

Rory finally relented and we get Kamryn to school without further incident.  The next obstacle is going back home, grabbing a snack and walking Rory across the street to preschool.  He starts to tell me he wants me to drive, but since I plan on running immediately after he gets dropped off, I don’t want to have to drive back across the street and park the car and drop off my keys and purse before I go.

He was finally in agreement and we headed out the door.  As we were walking, we talked about all the things he might do today.  I would ask him if he thought he was going to sing songs and he would reply with an enthusiastic, “Yep!”  Play outside?  “Yep!”  Once again we held hands and talked about how awesome preschool is and how many pine cones we saw.  The kid is obsessed with pine cones all of a sudden.

I got to the gate to go inside and I said, “We’re here for preschool.”  The woman just smiled and nodded because she could tell I really had to struggle to get that sentence out without letting my voice crack.

We were there about 15 minutes early so I could take some pictures. 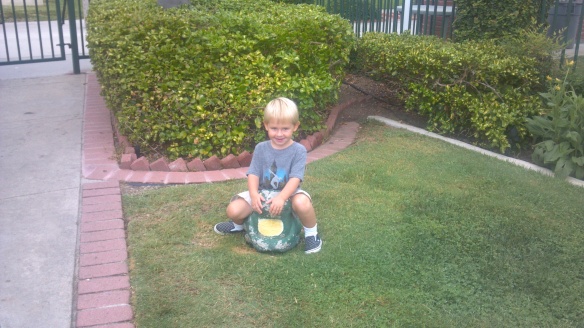 He was a bit hesitant when he was approached by one of the teachers, but then blurted out that he had on an Olympic shirt and he was Michael Phelps.  Nice.  When it was time to go in his classroom, he slowly let go of my hand and walked in to his carpet spot.  His teacher already was welcoming the kids in with a song about dinosaurs and Rory jumped right in with the actions.  I walked out, nearly on the verge of a breakdown, stopped and walked back to peek in the door just to make sure he wasn’t looking for me.  He turned around right as I looked in and waved good-bye.  I blew him a kiss and immediately turned and started frantically looking for something…anything on my phone so all the other parents wouldn’t see the tears streaming down my face.

Once I got to the parking lot, I wiped my eyes, blew my nose, turned on Pandora and I…was….runn-ning!  My thoughts never left my little boy and once I got home about an hour later, I walked into silence.  Oh wow!  It’s quiet!

I took a shower without anyone barging into the bathroom to discuss what bodily functions they needed to take care of or screaming that someone hit them.  I could shave my legs in a leisurely and thorough fashion instead of some half-assed shave job that left tufts of hair on my knees and ankles.

And then when I got out of the shower, I could get dressed in what I wanted without recommendations from my fashionista daughter or questions about certain parts of my anatomy.  Things were looking up!

I spent the next two hours on the couch, watching HGTV.  My parents are in town so my mom came over to help out at pick up since both kids will be getting out at almost the exact same time for the rest of the month.

I went to pick up Rory and while I waited for him to get dismissed, one of the teachers came up and told me how great he did and that he was the sweetest little boy.  I handed her a picture to put on his cubby and she hugged it…seriously.  I’m not saying she was crazy, but she really likes Rory.  And just for the record, this is the picture that’s going on his cubby.

Once I saw Rory come out of his classroom, I started to tear up again, but it was short lived when I saw how happy and excited he was.  He told me he had cheese at snack time.  Awesome.

And not long after we got home, he was passed out from his big day at school.

Those maze worksheets and follow the line activities really wear a kid out.

He only slept for about an hour and right as he woke up, I got a text from the mom of one of the kids in Kamryn’s class who asked if the kids could come over for an hour to play.  I told them they could, but I didn’t want her to feel like she had to take both of them without me.  She insisted and I conceded.  I’m once again home alone!