If you know me either in person or just by reading my blog you may have come to the conclusion that I am not the most serious person on the block.  Some may call me a bit sarcastic.  Others have suggested a career in stand up comedy – those suggestions may have been written in elementary school yearbooks, but I think the point I’m trying to make is that you don’t suddenly become funny.  You either are or you aren’t and clearly I’m hilarious…and modest.

I do enjoy playing some good natured jokes on friends and family.  During my freshman year in college my roommate, Kristi went to Mardi Gras in New Orleans.  I thought she was coming home on Saturday or Sunday and when she failed to show up on Sunday evening, me along with my friend Rachel, who lived across the hall, made missing person posters with Kristi’s picture and plastered them all over campus.  Kristi came home early on Monday morning and went immediately to class.  She was recognized by numerous people which was how she found out about the posters.  I can’t remember if she was mad when she came home with a handful of our posters that she had ripped off the doors, telephone poles and trashcans.  I’m going to say she wasn’t because it was not only a good quality joke, but Rachel and I really committed to it.  We were out really late putting up the posters and it was a freezing February night in Iowa.

I love pulling off a good prank, but I’ll be the first to admit that I have a terrible time trying to keep a straight face.  I have to think of horrible, horrible things to keep from smiling.  The alternative is for me to set up my joke, watch the initial reaction from my victim and  immediately shout out “Just kidding!” so I can laugh openly.

One person who isn’t fun to pull practical jokes on is my husband.  Sure, we have a grand time joking around, but he does not like to be the butt of a joke.  He’ll most likely read this and get pissed that I wrote that, but it’s important that he is aware that he is a joke hater.  No one likes to look stupid, but I’m always willing to take one for the team if it’s a really good joke.  If it’s not, well then you just wasted my time and yours.

Which brings me to April Fool’s Day.  I don’t like this day because it makes people who aren’t funny think they are funny for one day.  As a truly funny person, I find this incredibly offensive!  I am therefore boycotting April Fool’s Day.  Or maybe I have been thinking all damn day long about how I could pull a good joke over on my readers and have come up with a big, fat nothin’!

Both of my parent’s birthdays are coming up in the the next 2 months.  Last year, Kamryn and Rory made my mom a card because she always asks for drawings to hang up at work.  This was the killing two birds with one stone technique.  Kind of like giving framed pictures of your kids to the grandparents for Christmas presents.  They are always asking for the pictures so why not put it in a pretty frame, wrap it up in some festive paper and hand it over?  Done and done!

I sent my dad a store bought card for his birthday.  (At least I think I did – if I didn’t, I definitely intended to.  And I’m just throwing it out there, my cards are funny!  None of that Fathers are wonderful and protectors of the family bullshit.)  Anyway, shortly after my dad’s birthday, we were Skyping or just talking on the phone.  Damn, my memory sucks!  The point is, my dad had asked where his homemade card was.  I was taken aback.  Since when did my witty birthday greeting no longer suffice?

So Grandpa wants a homemade card, huh?  Somebody is too good for a Target bought card?  OK…you’ll get your card, Old Man! 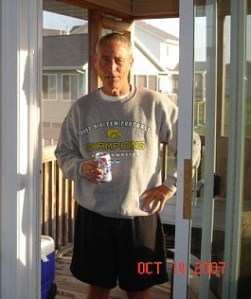 Does this look like a guy who wants a mushy card?

I told Kamryn we were going to make Grandpa a card for his birthday.  I had her put anything she wanted on it and I told her I would tell her the letters to write.  She was only 4 at the time, knew all her letters, knew most of the sounds, but couldn’t read anything yet.

Again, my memory fails, but I think I had her write Happy Birthday on the front and on the inside I told her to write the following letters: H-e-r-e i-s y-o-u-r f-u-c-k-i-n-g c-a-r-d G-r-a-n-d-p-a!  She asked me what it said and I told her, I just left out one word: Grandpa.  I’m kidding, I told her exactly what it said because it was high time she knew how demanding and needy her grandfather was.  Oh alright, I left out the f-bomb when I told her.

I examined the card and the profanity written in shaky, child script.  It was almost too much for me to take.  I was crying tears of delight.  I guess I should say that I knew my dad was going to love this card.  We aren’t a sappy family.  We all know we love each other, we don’t need to say it at each and every turn so that leaves much more opportunity for hilarious shenanigans!

I threw it in the mail and had to wait an agonizing 3 days before I got the call.  My dad could barely speak because he was so overwhelmed with love.  I’m pretty sure that’s what he felt.  He appreciated his card so much that he even took it out to the golf course to show his golfing buddies how much his granddaughter cares.

I really don’t know how I’m going to top last year’s card.  Kamryn is able to sound out a lot of words – especially those that are phonetically correct.  Maybe my mom will be getting her own R rated birthday card.  Her birthday is only a couple weeks away so I might be able to stunt Kamryn’s learning until then.

My only regret is that I didn’t scan a copy of the card, but I can say with almost 100% certainty that my dad still has that card and will keep it long past it’s days of being funny.  Oh who am I kidding, it’s never going to stop being funny.