It should go without saying that I strive to raise my children to be kind, accepting, polite and well mannered.  There is a lot that I, as a parent, feel a responsibility to teach my children and it isn’t just all the obvious things.

Humor has always been a big part of my life.  I don’t come from a family that is very serious about things.  In fact, my dad was making jokes during his own father’s burial.  It’s not as heartless as it sounds, my grandfather donated his body to the university and we did not receive his remains until 4 years later.  I think everyone had sufficiently grieved by that point.

I won’t go so far as to encourage my children to come up with a funeral stand up routine, but I will probably share with them ways to stifle laughter if you find yourself in a situation where you can’t stop laughing and it is extremely inappropriate that you are doing so.  I have found myself in that situation on many occasions and I have to go to a pretty dark place to stop.

One thing I like to do is take funny pictures of the kids.  I like to pose them in certain positions or doing something really odd.  Here is an example: 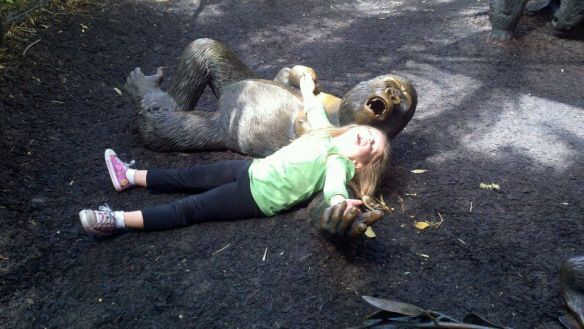 Last week we went to the Birch Aquarium with some friends.  There is a room with an enormous, floor to ceiling fish tank with equally enormous fish, eels and other sea creatures.

Kamryn had an idea of sitting in front of the tank while holding her breath to make it appear that she was actually in the water.

If I fail in all other aspects, I think she’ll at least get a little of my crazy sense of humor.