Kamryn’s school year is coming to an end and with those last few days of wrapping things up come the distribution of the yearbooks!  Ilove yearbooks.

The first order of duty when receiving a yearbook is to look through it and see how many times you’re pictured.  I would even count half-head shots or arm shots if it was a photo from an event I recognized and knew I was sitting next to someone featured in the picture.  I searched through my mom’s yearbooks to see how many times I could find her as well.  I’m a yearbook dork.

Today when Kamryn came out of school, I saw the book in her folder and yanked it out of there.  In my excitement, I exclaimed to her teacher how much I loved yearbooks and started flipping through the pages.  Mrs. M may have shared my affinity for yearbooks, but I was already enthralled in pages upon pages of thumbnail photos to hear her.

Kamryn has quite a few pictures in the yearbook.  I was kind of surprised because she is only a PEPPER and she is only there half of the day, but she got a good representation.  Well done!  What I didn’t expect to see was Ryan!  What the hell??? 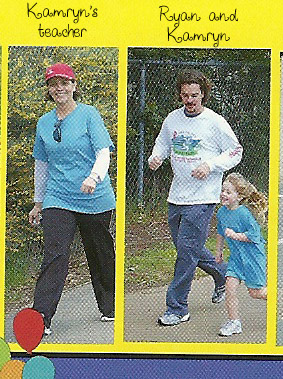 Ryan’s debut in the yearbook.

I might be just a tad jealous that Ryan made it in there since I was at Kamryn’s school a helluva lot more than he was!  I’ll let him have his moment, though.  Forever remembered in the 2011-2012 Diary of a W******d Kid.

One thing that Kamryn won’t fully understand about yearbooks until she is older is the art of signing and leaving comments in her friend’s books.  I followed the pretty standard template when signing my friend’s books:

If we were really good friends, I would take up at least a half page recounting all of our adventures together.  The funny thing is that those obscure inside jokes were so obscure that even I would forget what they meant when I reread them years later.  I recall being told to “watch out” for things a lot – most likely referencing a time that I made an ass of myself.

So while I didn’t get my picture in Kamryn’s yearbook like Ryan, I did notice that there was an entire page devoted to the PTA Board members.  I am the 2012-2013 Financial Secretary so it looks like I may have my picture in next year’s yearbook…with my name!