I stayed up to hear The President’s victory speech, but unfortunately, I didn’t hear much until Obama snapped me back to attention by yelling “WE ARE THE UNITED STATES OF AMERICA!”  I was too distracted by watching the people behind The President and to the odd mixture of audience members.

I was watching the woman standing behind Obama’s right shoulder.  She was posing or giving f-me eyes to the camera the entire time.  If you go back and watch the speech again, you can see her either trying to seduce Obama’s back or possibly using her 15 minutes of fame to look a little whorish.

I went in search of a still photo that included the little seductress and found that there were many more people distracted by the woman over Obama’s left shoulder who had stuck her flag in her hair.  I noticed her, but didn’t find her flag-head nearly as distracted as the woman licking her lips and batting her eyes. 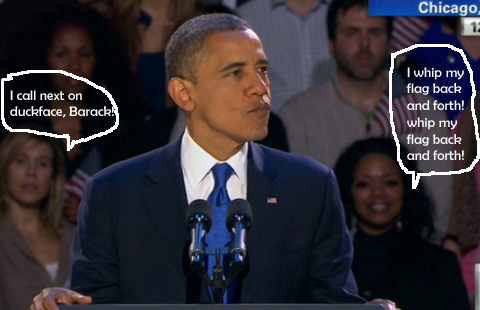 Ryan gets credit for the Willow Smith song play.