I have seen Valentine’s Day abbreviated as “VD” a few too many times over the last couple of weeks and I am 100% sure that the majority of the people that used that abbreviation thought their audience was mature enough not to think of Venereal Disease.  Try as I might, that will always be the first think that pops into my head when I see VD – I can’t help it.

This may come as a huge shock, but I am not a romantic person.  I don’t like to be doted on or have sweet nothings whispered in my ear.  Ryan is pretty much aware of this part of my personality and as a joke (or so he says) he gets me the sappiest card he can find and then writes something like “You are very good.  Love, Ryan”  at the end.  Hopefully Ryan doesn’t get mad that I am sharing his heartfelt words.  This year, I requested no gifts and for him to make me a card if he gets me one at all.

I may not be romantic, but I do have a tendency to get a bit weepy when it comes to kids putting on Valentine’s Day Concerts.  This morning, Kamryn, along with about 150 other Kindergarten kids put on an absolutely adorable Valentine’s program.

I may have had a hand in making the "V". Kamryn's teacher put in me in charge of putting the white specks on there. Yeah, I'm a pretty big deal.

Here was the playlist from this morning’s concert: 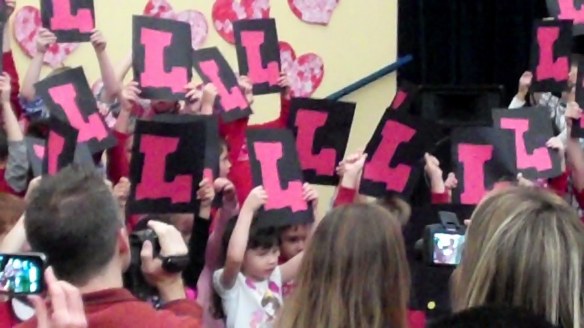 So I guess to me, love is a watching my little girl sing her heart out, having Ryan pick up dinner so I don’t have to cook tonight and Rory being his crazy self and then taking a nap.