On January 29, 2009, I was given the arduous task of coming up with 25 Random Things About Me.  It was one of those Facebook things that we have all seen – most of which I ignore, but this one decided to give a shot.  As it turns out, once I started, I almost couldn’t stop!  Surprise!!

I was going back through my old journals, notes, etc and came across my list.  There are a lot of things on there that I would change now either because they just aren’t true anymore or I have changed my opinion for one reason or another.  For example, #22 on the list was about Kamryn sucking her thumb.  She hasn’t sucked her thumb for almost 2 years now.  #15 was about how much I swear and that I need to stop.  I don’t think I really need to stop – I just thought I should say that so I don’t sound like an asshole.

The one item on my list that still makes me wonder is #12: I think I have a hidden talent that I have yet to discover and this is what I should be doing for the rest of my life.

In high school everyone had to take a career test to see what they would be best suited for.  I was either a freshman or sophomore and what I really wanted to be was an Interior Decorator.  I showed little to no promise in this field at all.  The one thing that made me believe that I had great taste was that I had the exact same comforter on my bed as Uncle Jesse in Full House.  It was this southwestern mint green thing.  We also had the same Elvis poster, but I was more impressed with the bedspread.  As I was taking my career test, I was trying my best to weigh the answers in my favor.  That damn dot matrix printer was going to spit out my destiny and it was going to be glamorous!

We had to wait about 10 minutes for the Apple II to compute all of my answers.  My creativeness was obviously way too much for it’s processor.  (Did Apple II’s even have processors?  Probably not.)  I was so sure of the outcome, I almost didn’t stop to look at the education needed to become a…Hotel/Motel Manager!?!?  WHAT?

My immature high school brain had no idea what a hotel/motel manager did, but this is what I assumed:  Hotels are open 24 hours, ergo, I would never get a day off!  I used to feel sorry for radio DJ’s because they had to work on Christmas.  Now I was going to be working on Christmas along with those on the radio, but at least they got to play hours of Sir Mix A-Lot, Boyz II Men, and Kris Kross (remember this was the early 90’s).

I was going to shoot for that Interior Design job anyway…until I read that I had to have a portfolio.  Aaaaannnnddd, I’m out.  That’s a lot of work and I’m pretty sure pictures of my Uncle Jesse bedspread wouldn’t suffice.

I don’t think I missed my calling as a decorator.  In fact, I know I didn’t.  So I will continue on my path and see what pops up along the way.  I made some really good soup two nights ago…does this world need another Soup Nazi???? 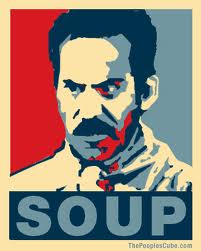