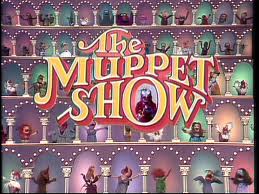 The Muppets Take Manhattan is on at our house right now.  When I saw it on the guide, I got really excited.  I think I saw this movie in the theater or really wanted to, but seeing it as an adult gives me a whole new perspective.  I loved the The Muppet Show and all of the early Muppet movies (I feel like they lost their way in the 90’s).  I was even a fan of the Saturday morning cartoon, Muppet Babies.  I would always try and look up into the TV to see Nanny’s face.

One thing that I didn’t understand was why there was always a mix of “human” Muppets and animal Muppets.  And why some animals could speak and some couldn’t.  There were talking bears, frogs and pigs, but those chickens that Gonzo had unnatural Muppet love for, couldn’t speak a lick.

Beyond hints at zoophilia, Kermit was in a blatant, verbally and physically abusive relationship with Miss Piggy, I always hoped they would procreate and produce little frigs or pogs.  I thought it would soften Miss Piggy and make her not so much of a bitch.  They do get married at the end of The Muppets Take Manhattan, but Kermit really hesitates before saying “I do”.

My favorite Muppet was Rowlf.  I didn’t know why at the time, but watching the movie today, Rowlf was a pretty sarcastic dog.  I guess even at eight years old, I had an appreciation for sarcasm.

I may go on a hunt for the original episodes of The Muppet Show.  My parents would watch it with us so I’m assuming there had to be more adult humor in the shows than I remember.  Like those two old asses up in the balcony – I never got their jokes when I was a child, but I bet I would now.

I think the most memorable Muppet besides Kermit was probably Animal.  Everyone always claims that Animal was their favorite, but Animal was a ticking time bomb.  He was all coked up (it was the 80’s) and was allowed to harass and terrorize whomever he chose.  He was one helluva drummer, though.

At the risk of sounding like anyone older than dirt, they really don’t make shows like The Muppets anymore.  And to make sure Ryan doesn’t get upset for me not recognizing his Swedish heritage…