Last night, after spending a day at Wrigley Field, we headed back to Miller’s Pub for dinner. Ryan and I had stopped in at this place the night before for a night cap and we met Frankie. Frankie is a homeless man, but he told me he always keeps a smile on his face. He said he tries to get $53 a day so he can get a room because he’s tired of sleeping in the park. Frankie was outside again last night and was smiling from ear to ear. I asked him if he got enough money to get a room and he said he did. I had told all of my friends about Frankie and within a few minutes we had dinner for him, over half his cash for a room and a potential job greeting customers at a bank. 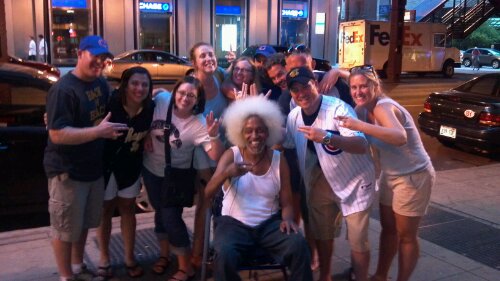 Did I mention Frankie has a huge white afro? He thanks his grandfather for that.

If you’re in downtown Chicago anytime soon, go see Frankie and help him out. He’s got a lot of interesting stories about his life and his energy is contagious.